First of all, we have really enjoyed doing the Holy Mountain Toy Vault posts!  Sharing our toys with you guys has been a lot of fun and we appreciate the overwhelmingly positive response to this new series.  So with that said Joel and I were thinking what would make this series even more fun for us and hopefully you guys as well.  The first thing we thought was to document and share the toy stores out there in the world that we love.  To share the spots we think are incredible and hopefully drop a little spotlight on the places we think are really killing it.  So that brings us to where we are right now which is introducing the first toy store post to the Toy Vault series!  For our very first episode, we went to Ka-Pow Collectibles in Chicago and visited what is now one of my favorite toy stores period. 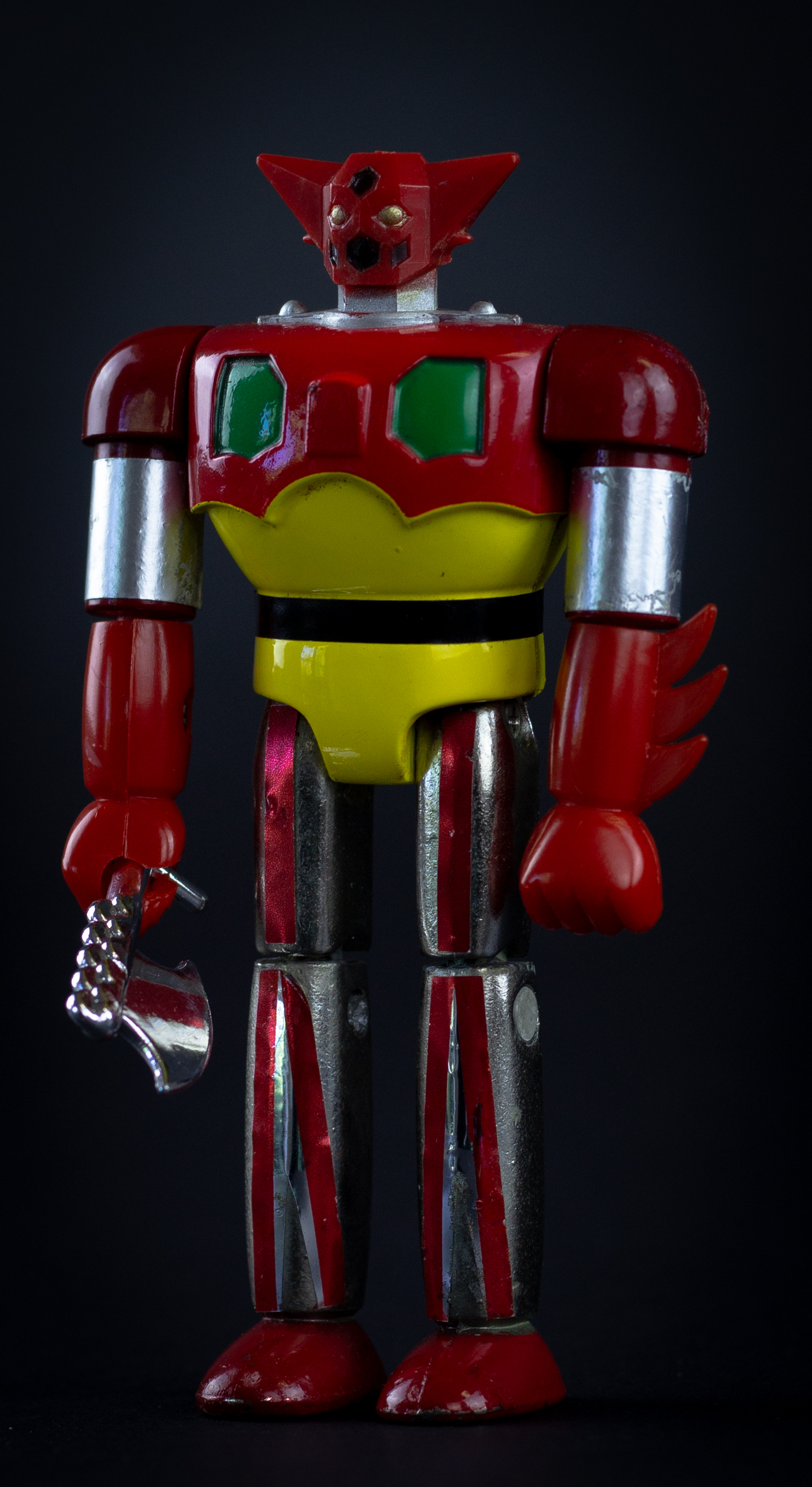 Joel and I entered Ka-Pow and were immediately overwhelmed with the size and density of the collection packed into this small building.  It was hard to even take it all in, I had to take a cursory spin around the place before diving in and really trying to see everything.  The real star of the show for me was the back cases filled with giant robots and Kaiju toys.  I labored over my selection and trying to narrow down what I would leave there with and considering the selection on hand I can tell you that was a hard decision to make.  Every time you felt you had decided some other piece you did not initially noticed peeked out of the densely packed toys and screamed your name. 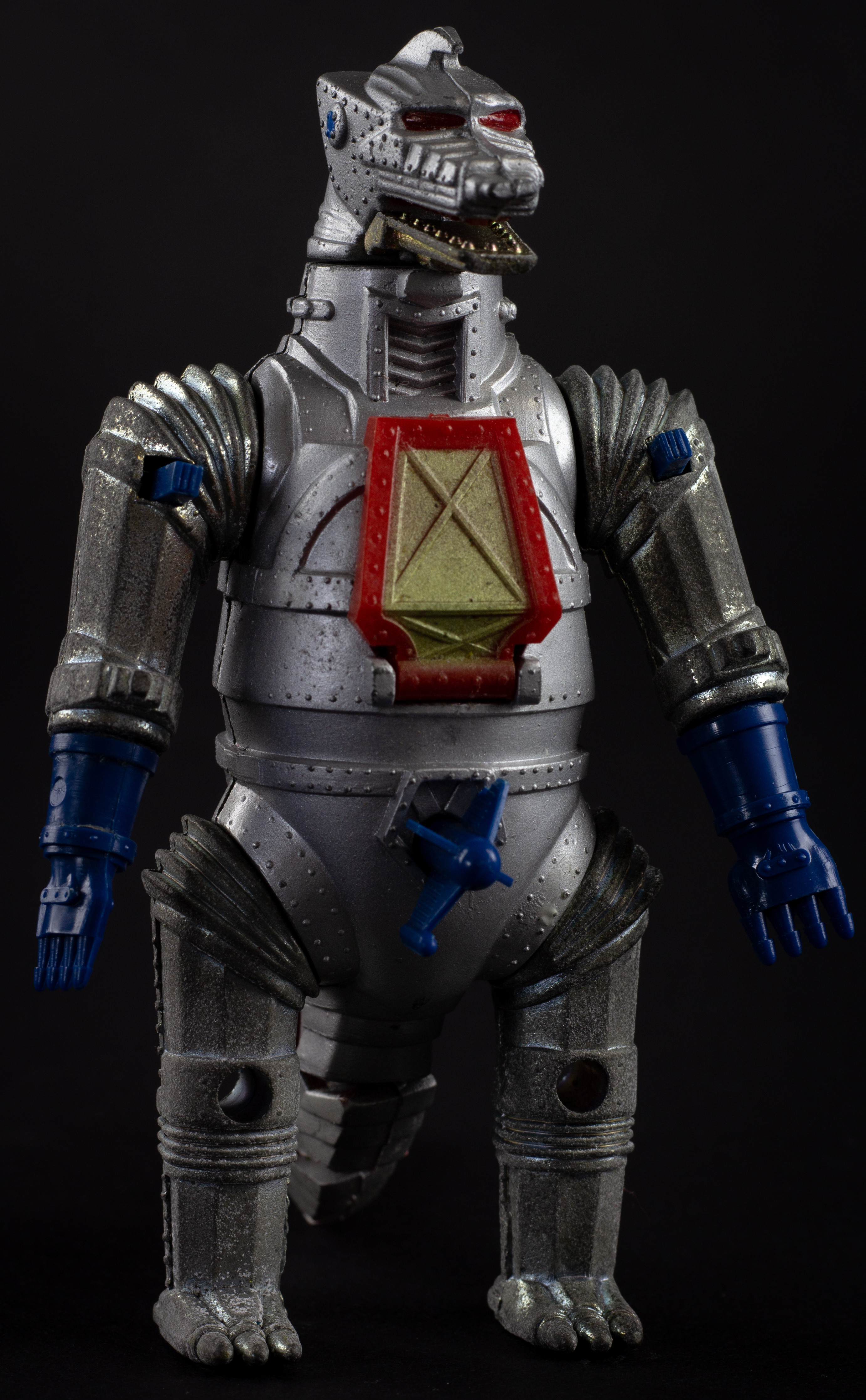 Ultimately owner Romeo Magdaluyo popped the case open to show me a few pieces and helped me narrow it down to what I feel really were the best decision I could have made that day.  He showed me a 1974 die-cast Getter 1 that was truly a thing of beauty and needed to go home with me.  He now stands happily next to the badly beaten and played with Shogun Warriors toys of my childhood. While we were in the case I noticed the 1975 Bullmark Mechagodzilla with what my son referred to as the unfortunately placed crotch missile haha.  He is a heavy little die cast sunnuvabitch and both his arms and the chest missile still fire as well as having a great little feature where his mouth opens and closes as you turn his head. 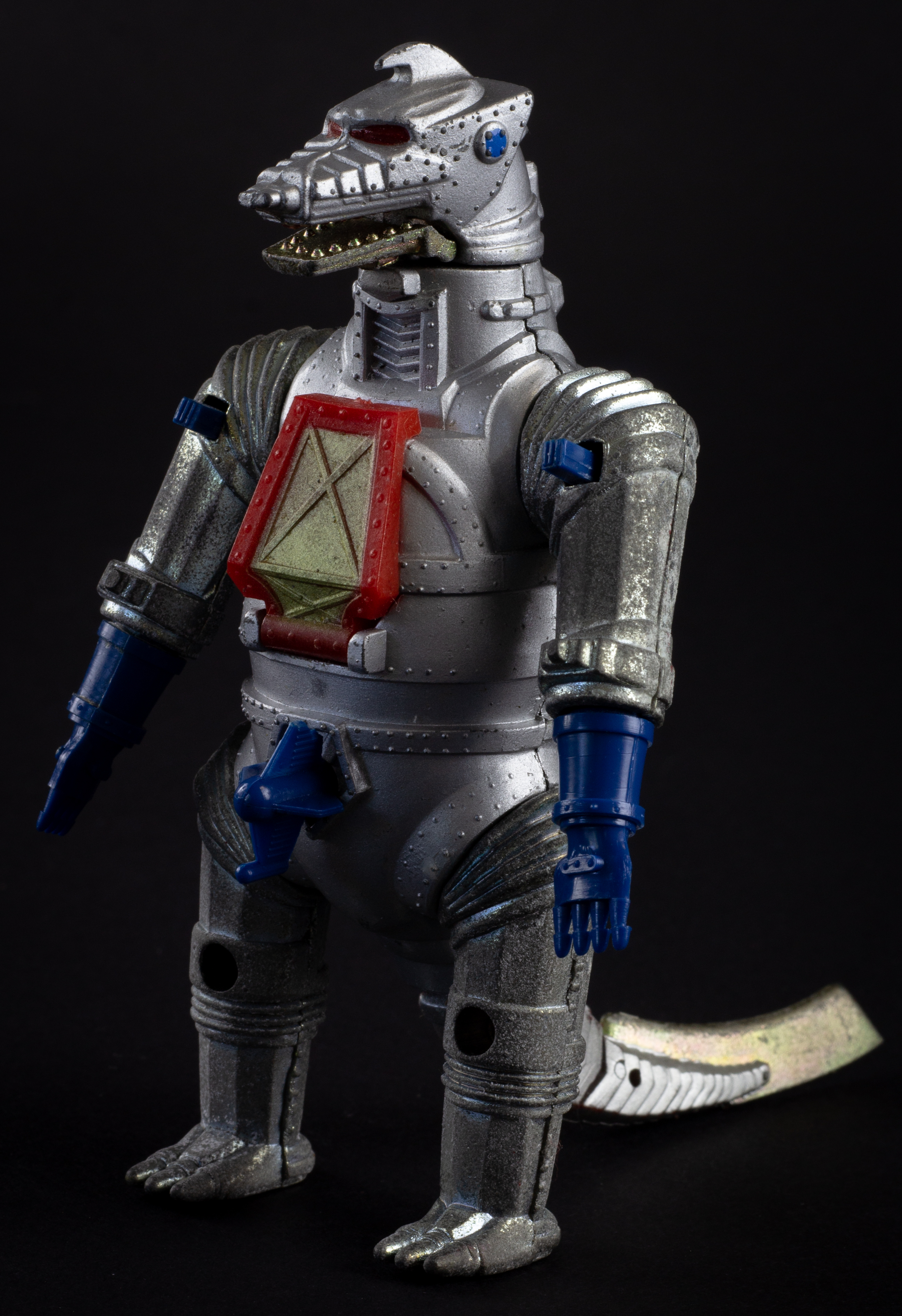 He was the obvious choice for our shop considering we have a 10 foot Mechagodzilla that greets you upon entering the front office.  My first visit to Ka-Pow put was stellar and put them high on my list of toy stores.  If you are in the area I cannot stress enough that you make this place a priority stop on your trip! 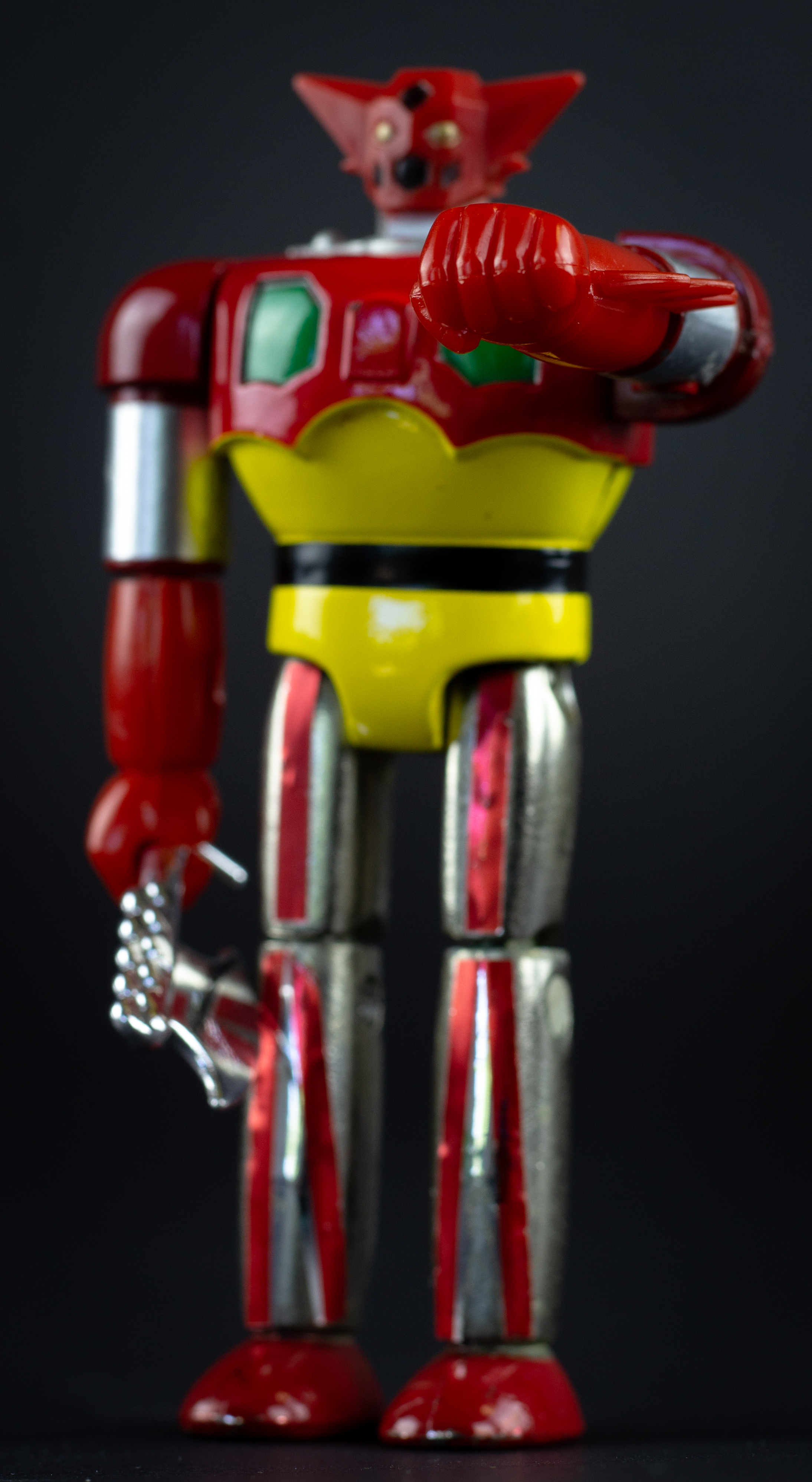 I agree with Danny when I saw that Ka-Pow was hands down my favorite shop. I was born in 91. So my taste in toys can be a little bit different compared to Danny's but my love for 70 and 80s Kaiju, Robots and dudes in suits stomping on buildings or yelling HENSHIN at the camera is just the same. Walking into Ka-Pow was like walking into a place of worship. The walls were COVERED with Super Sentai figures and Kamen Rider figures. I saw a lot of great Transformers, Power Ranger, Star Wars and other items but it was stuff I have seen at my local shops. While talking with the owner and Danny I noticed this bag behind the owner. It had Kamen Rider V3 on it. I could recognize that white, green and red suit anywhere. I just spent the previous month painting the model kit! After talking about the bag and the previous owner of it with Romeo I had to have it. I mean just look at it! 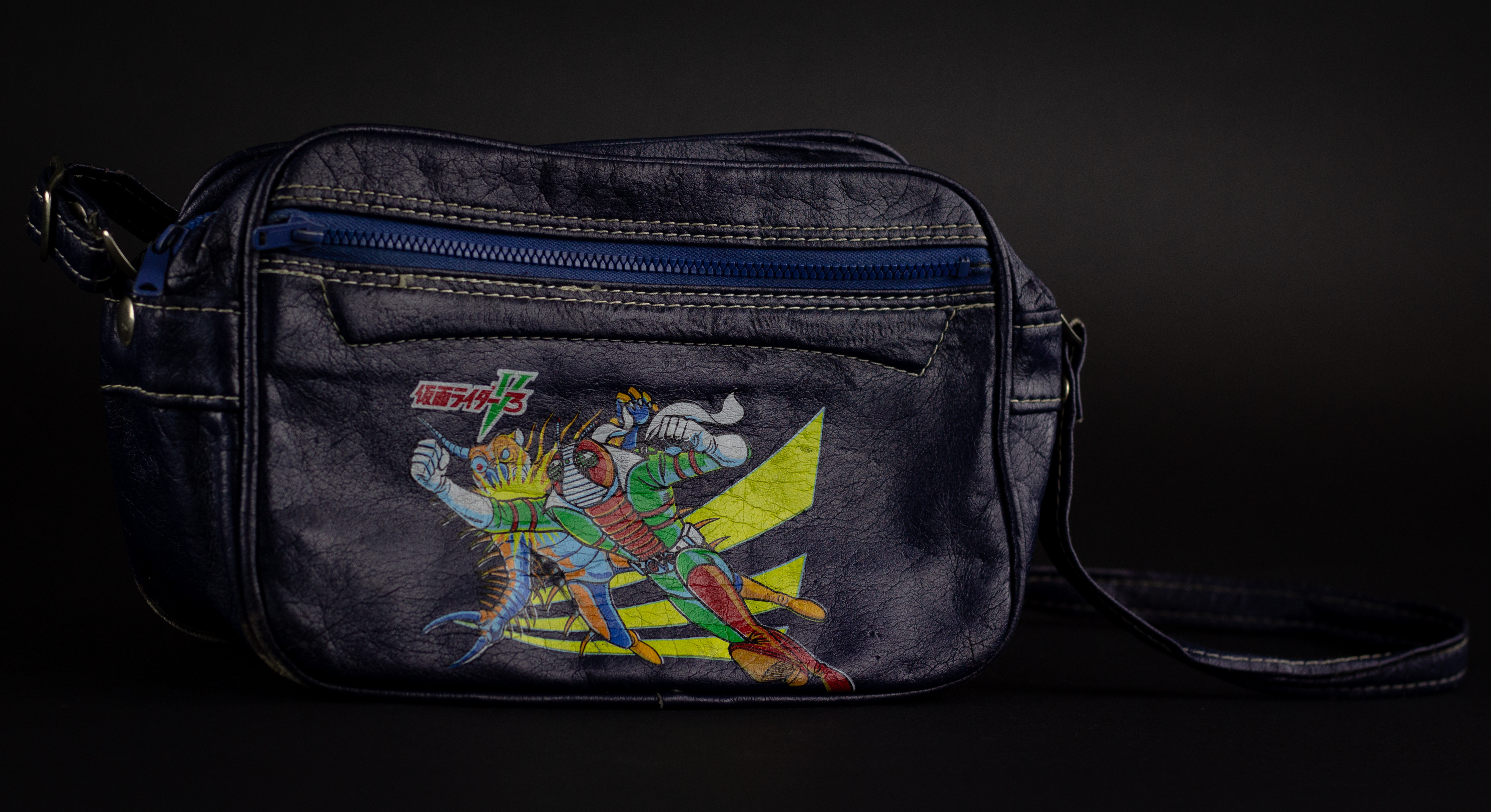 Now before I noticed that bag, I saw all the way up on the ceiling a Great Mazinger Z box. Then I noticed that beautiful red Bandai logo in the corner! This was a model kit! I love collecting and building the older Bandai model kits of Super Sentai and other robots. I just had to have this kit. This is a kit from 1998 when Bandai was doing a lot of these types of kits. I can't wait to build this and show you all the final product. 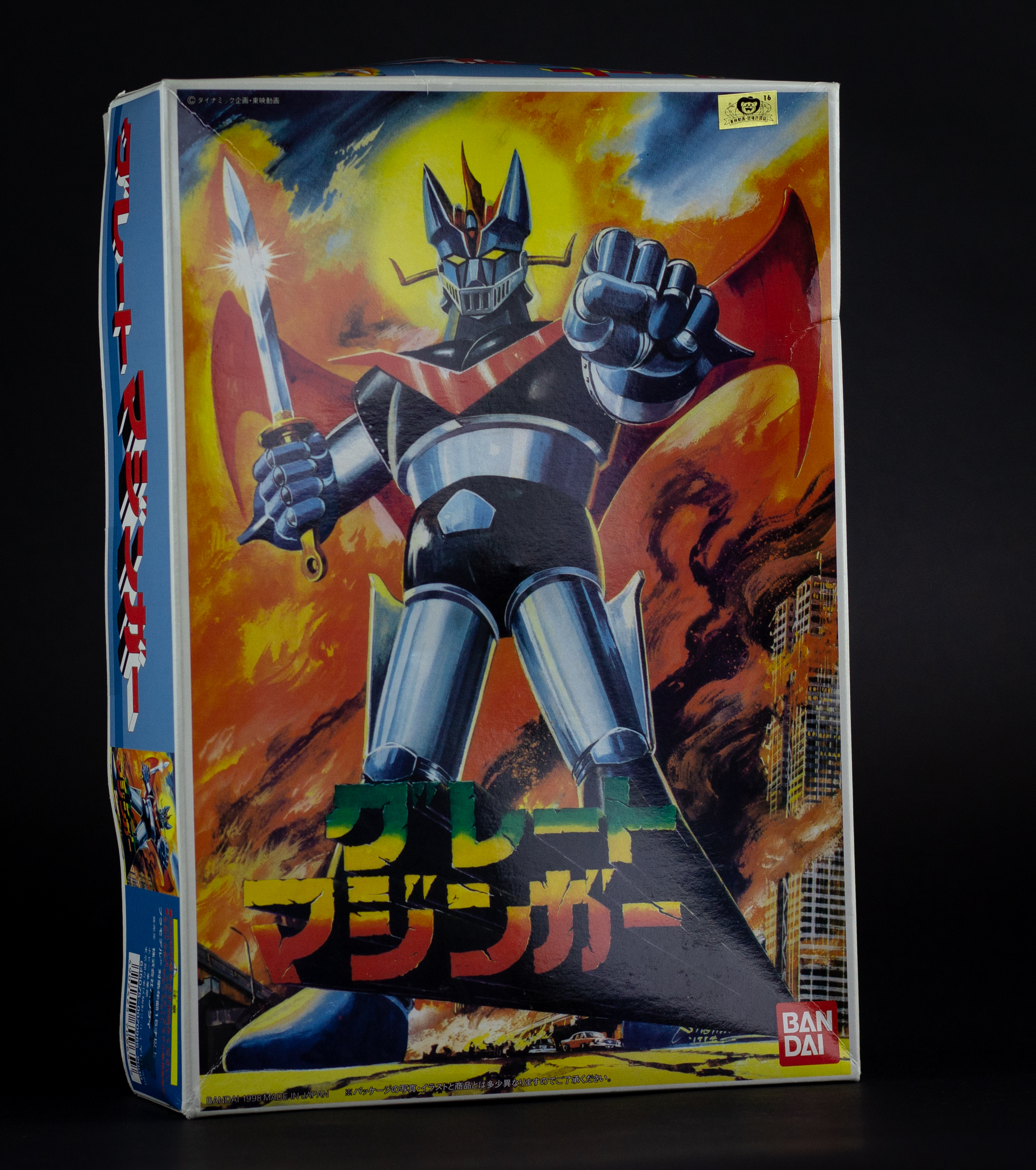 In closing, we both hope you all enjoy this first entry of many from our Toy Hunting in Chicago. Big shoutout again to Ka-Pow Collectibles in Chicago. You can check out their facebook page here: 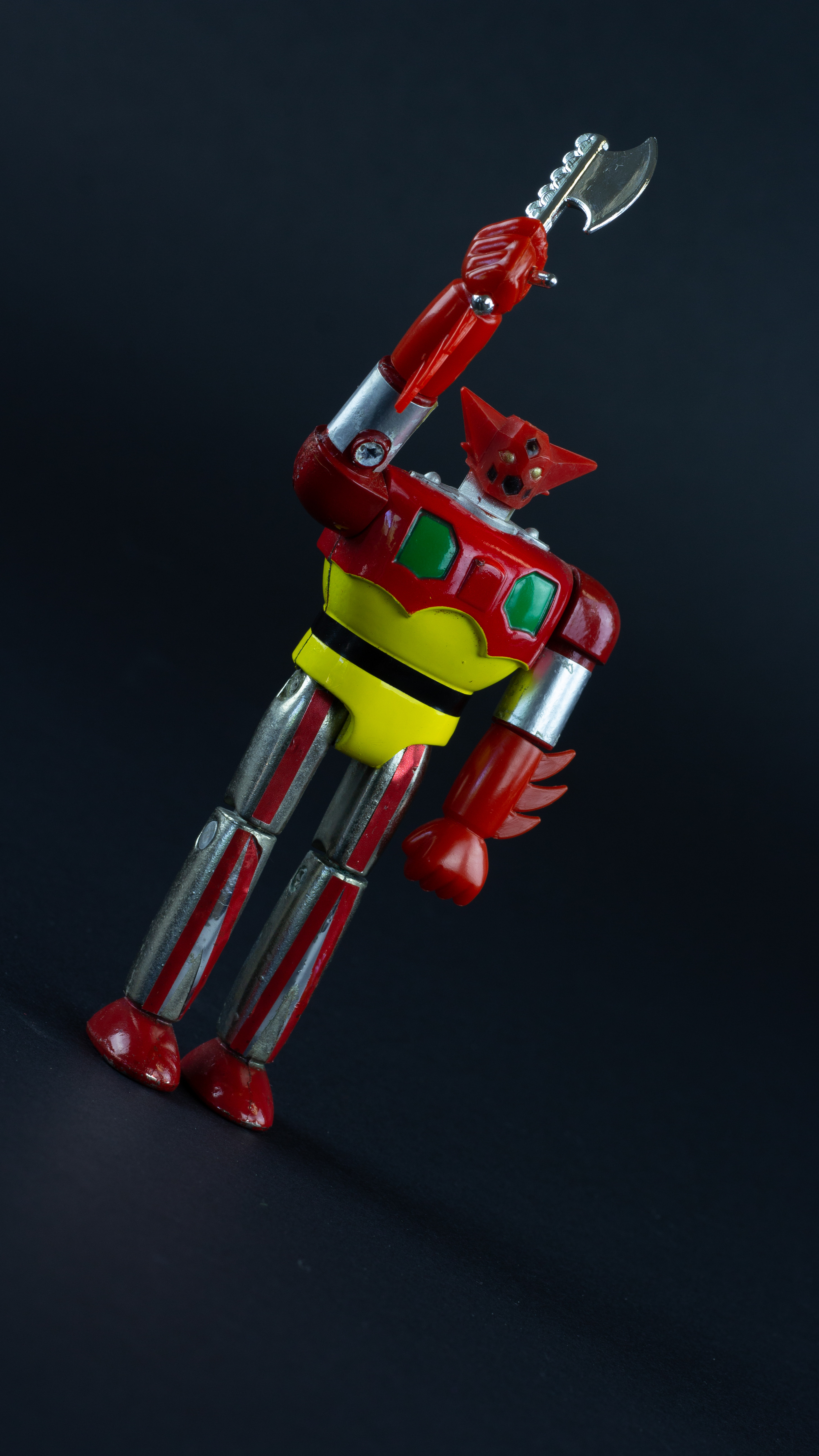 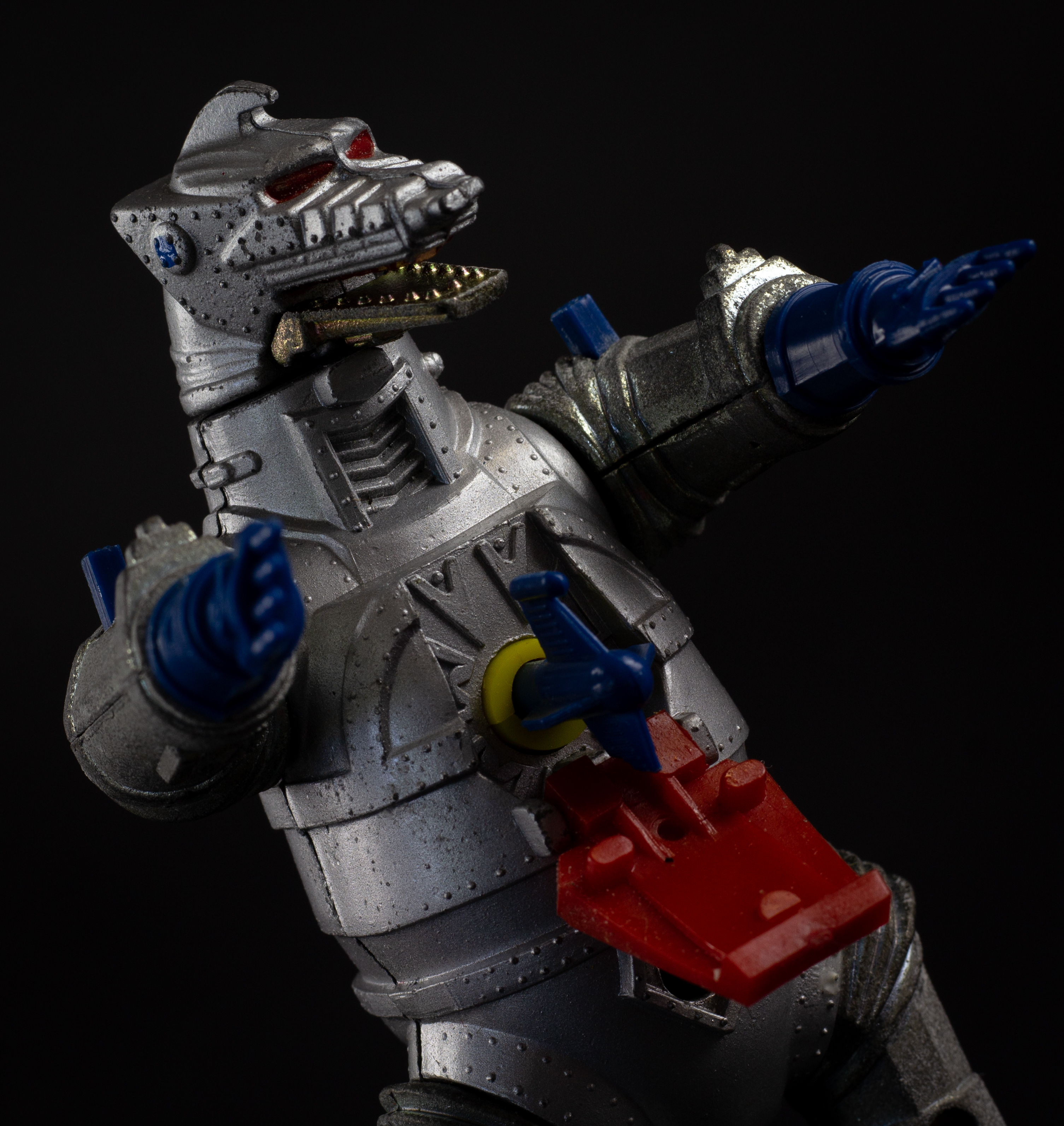 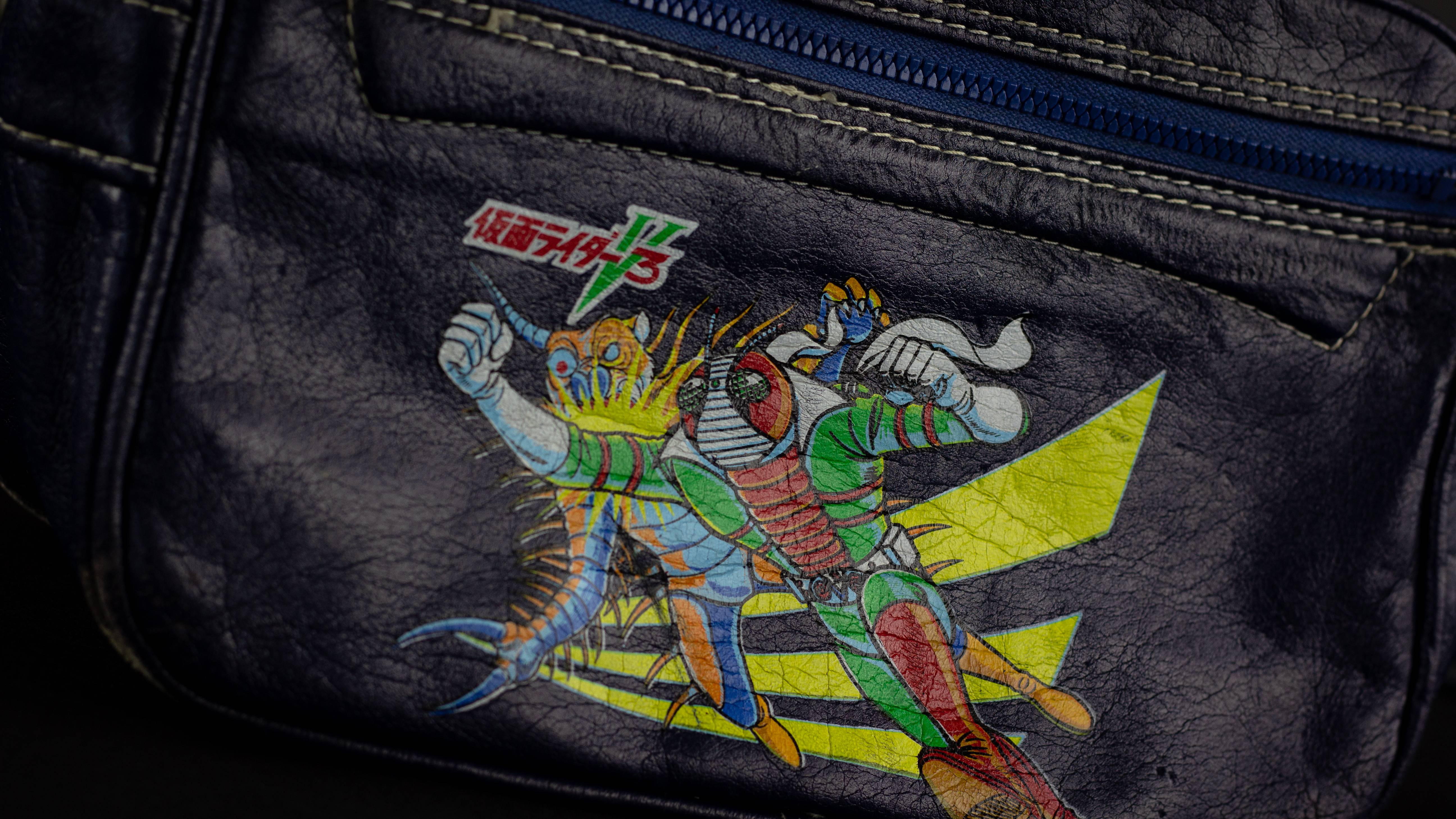 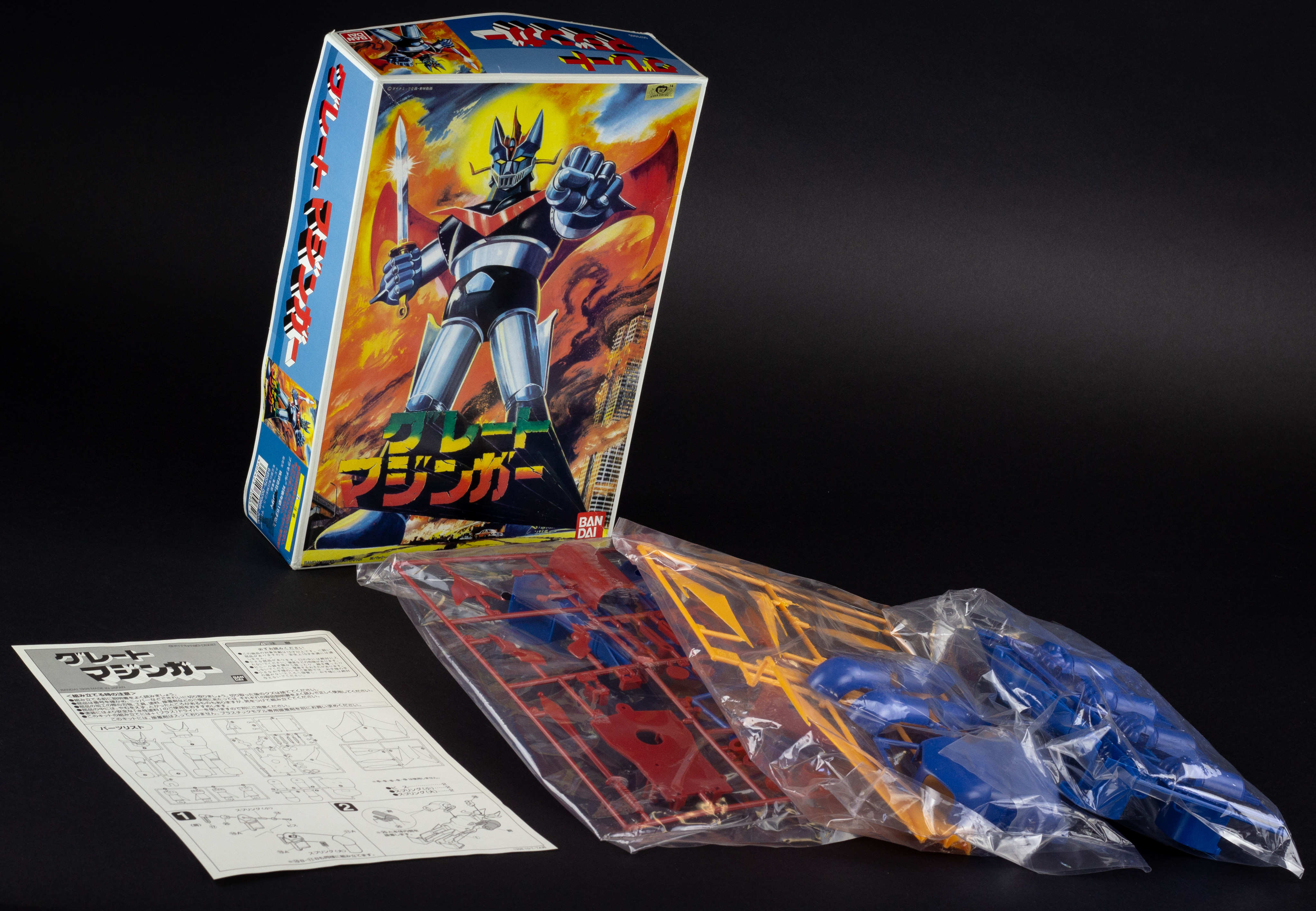